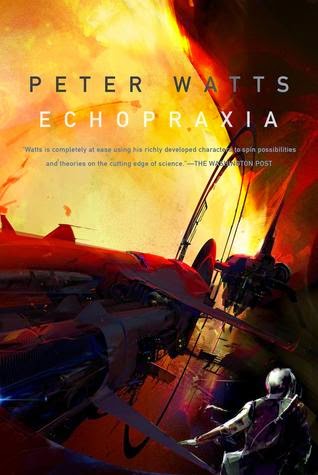 One of my all-time favorite cogsci-fi novels, Peter Watt's Blindsight (previously here and here) has a sequel now. It's Echopraxia, and this review makes it sound pretty terrific.

I'm stoked! Anyone else read it?

Explanation of the title from the review:

As for zombies, they are simply people whose higher thought processes have been turned off. This is done either by surgery, or as a side-effect of bioengineered viral plagues. Zombies function autonomically, without conscious awareness. Their mental apparatus is “reduced to fight/flight/fuck” basic responses. They make great soldiers and sex slaves, because they follow orders unquestioningly. They are in fact subject to the malady that gives the novel its title:  “echopraxia”  is the condition in which a person compulsively imitates someone else’s actions and behavior. When they are not under hierarchical control, they simply imitate one another, and go on rampages like in the movies.